I thought what better time to make a new post than this wonderful time of year. I hope you have all had a great time celebrating the holidays. It is this time of year that makes me very thankful and grateful for all the family and friends I have.

Now we all have our own traditions around Christmas time, our family we walk down to the Indian every Christmas Eve and have dinner and now I meet my friends for a few pints afterwards every year. This year we spent Christmas Day at my grandparents with the whole family which was perfect. We don’t really have any strange traditions but I love to see what other countries do around this time of year and let me tell you I have come across some very peculiar traditions.

Now this time of year we all look forward to the Christmas Feast. Nothing beats Christmas Dinner and all the buffet food. Well have you ever thought…why don’t we just get fast food for dinner instead of the big feast? It would save a lot of stress wouldn’t it?

Back in 1974 there was strong advertising by the very clever Takeshi Okawara who managed the first KFC in Japan who then had the idea to sell the Christmas ‘Party Barrel’ which is inspired by the American Turkey Dinner but of course instead of Turkey it’s Fried Chicken. The campaign was named ‘Kurisumasu ni wa kentakkii!’ which is ‘Kentucky for Christmas’. Before this campaign Japan had no tradition for christmas but now they do and they enjoy KFC for Christmas Dinner. It was reported back in 2015 that 3.6 million households would have KFC with Christmas not even being a National Holiday for them.

The dinner has even become quite elaborate including chocolate cake and you can even get wine to pair with your party barrel.

At least we know if everything goes wrong with the christmas dinner…you can just get KFC instead.

Now we all love to decorate our households with festive decorations but do any of us create a little game with this? I know our family don’t but Germany have got a great tradition.

Find the Pickle…yes you read that right also known as ‘Weihnachtsgurke’ this has also become a popular tradition in American Households.The tradition is that the night before christmas parent’s will hide the pickle in the Christmas Tree. Then the next morning the first child to find the pickle would get an extra present or good fortune the following year.

I really quite like this idea it’s even funnier that it is a pickle…might have to try this next year. 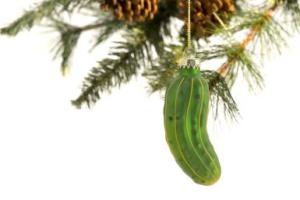 We have all heard of Krampus now thanks to the film coming out last year. I like to think of Christmas as a happy time but of course we have to have some scary side too. Now I am a confessed cat lady myself so this next tradition is a favourite of mine. This one is called Jólakötturinn which is the Icelandic Yule Cat.

This story goes back to the dark ages and apparently it used to be used by a threat by farmers to scare their workers into finishing up the processing of wool from the fall season before christmas. I think that is pretty clever…

La Befana, who is La Befana you ask?
In Italy the children look forward to the night of the 5th January also known as Epiphany Eve. This is related to The Three Kings who stopped by at this witches house on the way to see Baby Jesus and asked her for directions. Unfortunately the next morning after declining and then changing her mind to see Baby Jesus she couldn’t find her way and now on the night before January 6th also known as ‘Three Kings Day’, which is the date that the Three Kings met Baby Jesus she flies around on her broom and leaves small toys for good children and coal for bad.

It is also similar to the tradition of Santa Claus as families leave a glass of wine and a plate of sausage and broccoli for her. It is also believed that her name is derived from the Feast of Epiphany enjoyed by Italian families known as ‘La Festa dell’Epifania.’

I have never heard of this tradition but it is a big celebration as Italy do not celebrate the typical christmas day like we do they celebrate Epiphany day.

Venezuelans celebrate Daily Mass between 16th and 24th December and especially in the Capital City Caracas they have developed quite a strange tradition and that is to roller-skate to this service. The masses leading up to the midnight mass on Christmas Eve ‘Misa de Gallo’ are known as ‘Misas de Aguinaldo’.

Firecrackers explode and bells ring to call the locals from bed in the pre-dawn hours to wake people for this service.

Also similar to Italy January 6th is the day when the children in Venezuela will look out for gifts to signify the Three Kings visiting Baby Jesus. After the mass services Venezuelans will go out and eat tostadas and drink coffee. Then after the Misa de Gallo families will go back home and enjoy their Christmas Dinner.

We all have several ornaments that we associate with christmas whether that be Santa or  a Nutcracker. Now have you ever heard of the Caganer?

I certainly haven’t and when I think of Christmas and Decorations I do not normally think of a defecating man. Yep that is what the Caganer is. The Caganer is a figure which is shown to be defecating in the nativity scene in the Catalan Culture. The figure is depicted as a peasant wearing traditional Catalan clothes taking a dump in front of the Baby Jesus.

The figures have now expanded from the typical peasant and now includes our very own Queen Elizabeth II who is one of the ‘best sellers’.

The range of these figures is crazy just from doing a quick google search I found many different options.  I also found one which sums up 2016… 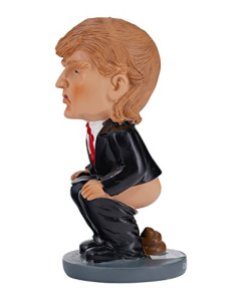 Donald Trump…Taking a dump finishes this blog post off perfectly.

I hope you enjoyed this post and that you’ve had a lovely festive season. I loved finding out all these different traditions and I would love to hear about your traditions from across the world and we can share them together.

I look forward to the New Year and seeing what it brings and sending you all my best wishes for 2017.

Thank you for reading,

The Isle of Man

I'm here to provide you with positivity and bring you on my journey of a twenty something Yorkshire girl.

This error message is only visible to WordPress admins


Error: API requests are being delayed for this account. New posts will not be retrieved.

Make sure this account has posts available on instagram.com.

I don't really think I have a set theme for this blog it's a mix of lifestyle tips, how to feel great and staying positive. I hope you love it!

If you have any questions regarding my blog or want to work together then please get in touch.

Want to Read Something?