This blog post is going to be about something a little bit different. Now we all appreciate how incredible the opportunity to be able to travel the world is don’t we? Do we think about what a mass amount of tourists can have on some of our most favourite city break destinations?

When I was wandering the streets of Venice on my recent holiday I was seeing many posters and banners saying ‘No Grandi Navi’ basically translating to ‘No Large Ships’ of course meaning Cruise Ships.

As me and my boyfriend were walking around Venice we were admiring the stunning area and landscape and our breaths were well and truly taken away. Then all of a sudden a cruise ship which against the Venetian landscape resembles ‘Godzilla’. I never really knew how big Venice was for the Cruise Ship market but it turns out around 600 large ships dominate this city every year.

That is quite astonishing to start off this look into why these are having a bad impact on the locals and the city itself. I wanted to show you a selection of pictures that I’ve found which describe it in itself:

They are so big and dominating against Venice and it’s transport system and they are almost quite scary to see. Imagine being those locals and tourists on that bridge it looks terrifying like some sort of apocalyptic scene.

Now I may be exaggerating a little and do not get me wrong the cruise industry is a wonderful and hefty part to tourism. Cruises are a great way to venture into multiple destinations in a very easy way, you wake up each day in a new city ready to explore. Yet in major cities they are causing quite a lot of controversy.

Cruise ships are said to bring in 30,000 passengers per day to the city during it’s peak period. Tourism in total bringing approximately 22 million visitors each year!

When you walk around Venice it isn’t actually that big of a place the streets are rather narrow and each part is so historic. Since 1987 Venice and it’s lagoon has been a UNESCO world heritage site but last year the United Nations placed a warning to the Italian Government. They need to put in some sort of management framework to help handle the mass amount of tourism which is affecting it’s delicate ecosystem or it will become a part of the endangered historical sites list.

Locals are having to take matters into their own hands with mass protests going on as the Mayor seems to not be taking sensible action. He of course wants to encourage cruise tourists for the economic benefit…but isn’t really thinking about the negative environmental impact. He wanted to create a new docking station for Cruise ships outside the historic centre in the lagoon, yet the UN clearly stated that they need to look at banning the large ships coming into Venice and also making a construction in the lagoon causing even more damage.

As I have done some research I can see that this has been going on for years but the locals are finally really fed up and with the threat of becoming an ‘endangered historic site’ things need to be taken very seriously! In September 2016 major protests took place in the Giudecca Canal as people took their stand against the ships. 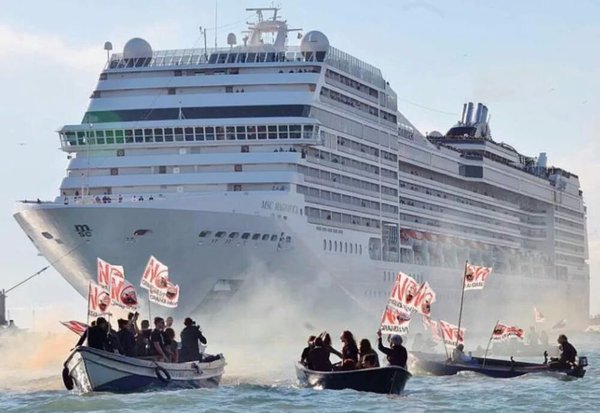 An unofficial Referendum took place just before we arrived this year with around 18,000 locals voting with an astonishing 17,874 people voting against the ships. The Mayor has disputed these votes and said they are making up the rules but by this figure they really need to wise up and put in an official referendum with a plan of action to make sure this incredibly beautiful city does not just disappear.

In an article by the Telegraph it has been stated that there is a 10% decrease in cruise ships in 2017 from 2016. There is a definite dispute as the Cruise Lines of course are bringing in tourists and business to the locals. Yet I think there is a deeper issue with the visual pollution of a large cruise ship towering over St.Mark’s Square and of course the environmental pollution from the engines & water displacement.

A law did come in place in 2014 to lower the amount of ships allowed to enter Venice but after two months this was abolished. It has been stated that the cruise ships do use a low emission fuel to be allowed in to Venice but still the mass amount of ships feels very excessive and overwhelming to the landscape.

The last part of this post I thought I would share this wonderful sculpture that we saw that has been created by Artist Lorenzo Quinn. This sculpture is a pair of hands holding up the historic Ca Sagredo Hotel. This piece of artwork is named ‘Support’ it is highlighting the impact that climate change is having with rising sea levels threatening Venice’s future. We luckily got to see this sculpture and it has a very eery and hard hitting feeling about it and they do get you thinking about the impact that we are having.

What are your opinions on this topic? Share your feelings in the comments below lets start a discussion.

I really enjoy doing different posts like this and presenting some different sides to Travel and Tourism, what do you think would you like to see more?

Thank you so much for reading,

Game of Thrones in Real Life!

I'm here to provide you with positivity and bring you on my journey of a twenty something Yorkshire girl.

This error message is only visible to WordPress admins


Error: API requests are being delayed for this account. New posts will not be retrieved.

Make sure this account has posts available on instagram.com.

I don't really think I have a set theme for this blog it's a mix of lifestyle tips, how to feel great and staying positive. I hope you love it!

If you have any questions regarding my blog or want to work together then please get in touch.

Want to Read Something?